Ella Fitzgerald: The Tale of a Vocal Virtuosa Book Review 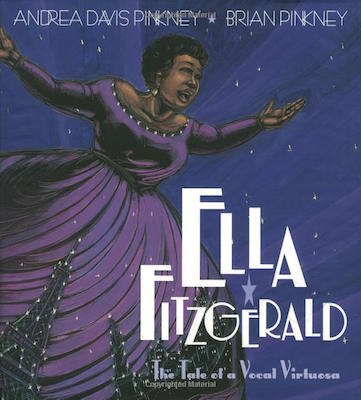 Ella Fitzgerald: The Tale of a Vocal Virtuosa by Andrea Davis Pinkney, Illustrated by Brian Pinkney. Jump at the Sun/Hyperion, 2002. Ages 5-9.

What’s this book about? “Let me tell you Ella’s story./‘Cause, you see, I was there. From the get-go.” That’s the voice of Scat Cat Monroe, the cool dude narrator-guide who pays homage to Ella’s grit, determination, and remarkable talent in four “Tracks:” “Hoofin’ in Harlem,” “Jammin’ at Yale,” “Stompin’ at the Savoy,” and “Carnegie Hall Scat.” Scat Cat Monroe tells of the contest seventeen year-old Ella wins at Harlem’s Apollo Theatre, an early breakthrough that helped secure her popularity among Harlem audiences who were “eating out of her hand” in the 1930s. Ella then gets noticed by Chick Webb, jazz drummer and band leader, who quickly recognizes her talent and mentors her in the swing style of jazz, an entertainment she and Webb’s orchestra bring to Harlem’s Savoy Ballroom for an extended stay. Later, Ella’s bebop vocals accompany Dizzy Gillespie’s “…ping-pong rhythms that gave bebop its sound.” With Gillespie’s band, she moves into scat singing—“abandoning the lyrics of a song to use nonsense syllables to carry the rhythm”—one of her most famous vocal styles. In the 1940s she joins “Jazz at the Philharmonic,” a traveling troupe of jazz musicians that played to racially integrated audiences, particularly uncommon at that time. The rest, as they say, is history. Ella wins thirteen Grammy Awards, a Lifetime Achievement Award, and a National Medal of the Arts.

Why is this a good book? This biography rocks with a writing style that’s hip, musical, and jazzy-poetic, and scratch-board illustrations that keep the story moving with characters that dance, swing, twirl, and soar across electric pages.

Next read: Pair this biography with Ella Fitzgerald singing some of her most famous songs. Try: Ella 100: Ella Fitzgerald: 100 Songs For a Centennial, Verve, 2017.